Home » Featured » What is Roblox?
FeaturedGuidesTechnology

What is Roblox?: Roblox is a modern and international online gaming platform that is fashionable among teenagers and slightly younger children. So while it’s easy to think of it as a single game, it’s really a platform. That means that people who use Roblox create their own games for others to play. It is something like Minecraft but made with LEGO pieces.

Surely your children, if they usually spend time watching videos on YouTube, will have seen some gameplay of a YouTuber playing Roblox, and they have asked you to play it. Should they do it? Well, this is what a parent needs to know about the game system.

Is Roblox a game?

Yes, but not exactly. Roblox is a gaming platform that supports games created by the user. In addition to being multi-user, these games are called Roblox games. Roblox refers to this as a ” social platform for gaming. “ Players can play while watching other players and interact socially with them in chat windows.

Roblox is available on most platforms, including Windows, Mac, iPhone / iPad, Android, Kindle Fire, and Xbox One. Roblox even offers a line of toy figures for imaginative offline play.

Users can also create private groups or servers to play privately with friends, chat in forums, create blogs, and trade items with other users. The activity is more restricted for children under 13 years old.

What is the purpose of Roblox?

Roblox has three main components: the games, the catalog of virtual items for sale, and the design studio to create and upload the user’s content.

Different games will have different objectives. For example, the game “Jailbreak” is a virtual cops and robbers game in which you can choose between being a police officer or a criminal. “Restaurant Tycoon” allows you to open and manage a virtual restaurant. “Fairies and Mermaids Winx High School” allows virtual fairies to learn to hone their magical skills.

Some kids may be more into social interaction, and some may prefer to spend time customizing their avatar with premium, free items. Beyond games, kids (and adults) can also create games to turn up and let others play.

Is Roblox Safe For Younger Children?

Roblox complies with the Children’s Online Privacy Protection Act (COPPA), which regulates the information that children under 13 may disclose. Chat sessions are moderated, and the system automaticall+y filters out chat messages that sound like attempts to reveal personally identifiable information such as real names and addresses.

That doesn’t mean some people can’t find a way to bypass filters and moderators. It is highly recommended that any parent discuss safe behavior online with their child and use reasonable supervision to ensure that they are not exchanging personal information with “friends.” As a child under the age of 13, you can also disable the chat window for your son or daughter.

Once your child is 13 or older, they will see fewer restrictions on chat messages and fewer filtered words. You must make sure to maintain communication with your child regarding online social platforms. Another thing older players should be aware of is scammers and phishing attacks. Like any other gaming platform, some thieves will try to access your accounts and steal your virtual objects and coins from the players. Players can report inappropriate activity so that moderators can deal with it.

Is Roblox safe for my child?

You can also watch some games to make sure the level of violence is acceptable. Roblox avatars resemble LEGO mini-figs and unrealistic figures. Still, many of the games involve explosions and other acts of violence that can cause the avatar to “die” by breaking into many pieces. Games can also include weapons.

Although other games have similar gameplay mechanics, adding the social aspect to the game can make the violence seem more intense.

We recommend that children are at least 10 years old to play, as some games within Roblox are completely harmless. Use your best judgment here.

You should also be aware that when the chat window is open, there is a lot of “junk” talk in the younger chat windows. Filters and moderators remove the more traditional swear words while leaving a bit of foul language, so kids like to say things like poop or pee or give their avatars something with poop in it.

If you are the parent of a school-age child, this is probably unsurprising behavior. Just keep in mind that your house rules on acceptable language may not conform to Roblox rules. Disable the chat window if this is a problem.

Designing your own games on Roblox

Games on Roblox are created by the user, which means that all users are also potential creators. Roblox allows anyone, even players under the age of 13, to download Roblox Studio and start designing games. Roblox Studio includes tutorials on how to configure games and 3D worlds for the game. The design tool includes common default objects and backgrounds to get you started.

That doesn’t mean there isn’t a learning curve. If you want to use Roblox Studio with a young child, we suggest that you spend many hours having parents sit with them and work with them to plan and create their game or world.

Older kids will find a wealth of resources both within Roblox Studio and on the forums to help them develop their game design talents. 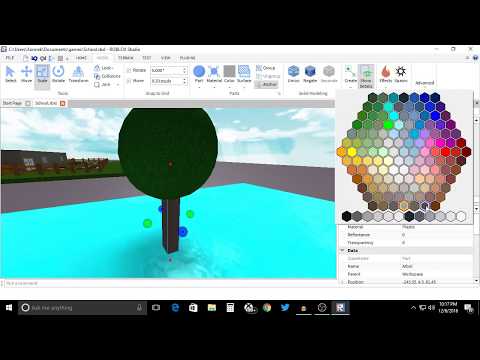 Roblox is free, but Robux is not.

Roblox uses a Freemium model. It’s free to set up an account, but there are perks and enhancements to spend money on.

The virtual currency in Roblox is known as “Robux” and you can pay real money for virtual Robux or slowly accumulate it through the game. Robux is an international virtual currency and does not follow a one-to-one exchange rate with euros or any other real currency. Currently, 400 Robux costs about 6.02 USD. The money goes both ways, and if you have accumulated enough Robux, you can exchange it for real money.

In addition to buying Robux, Roblox offers the “Roblox Builders Club” membership for a monthly fee. Each membership level gives kids a Robux allowance, access to premium games, and the ability to make and join groups. Robux gift cards are also available in physical stores and online.

How to Make money with Roblox.

What is Roblox and How to Make money with Roblox?

Don’t think of Roblox as a way to make money. Think of it as a way for children to learn some basic concepts of programming logic and problem solving and as a way to have fun.

With that said, you should know that Roblox developers do not make real money. However, they can be paid in Robux, which can then be exchanged for real-world currency. There have already been some gamers who have managed to make a lot of money in the real world, including a Lithuanian teenager who reportedly made more than $ 100,000 in 2015. Most developers, however, do not make that amount of money.

Now you know the answer to the question What is Roblox?, games on Roblox are created by the user, which means that all users are also potential creators. Roblox allows anyone, even players under the age of 13, to download Roblox Studio and start designing games.

How much did you like this information about What is Roblox?. Do tell us your thoughts in the comment section. We are always happy to know about your views on our provided information. Do follow us on social media | Facebook| Instagram| Twitter| LinkedIn| for all the latest information and news around the world. Join our tribe and allow us to become a part of your life.

How to lose face fat?