Home » Blog » How To Boil An Egg Hard?
BlogFeaturedFoodHealth

Does everyone know How To Boil An Egg Hard? And it is something as elementary as leaving an egg for a while in boiling water, removing it, peeling it, and that’s it. Even those who pass for a zero left in the kitchen can surely boast of making edible boiled eggs. We love eggs for breakfast! Cheesy scrambled eggs on toast, a fried egg sandwich, or some lovely boiled eggs are what we need to start the day.

How many times have you boiled an egg perfectly, peeled it, and then found that the yolk is green or grey in places?
The reason for this is that when an egg heats up, the sulfur in the whites reacts with the iron in the yolk to form ferrous sulfide. One should know how to boil an egg hard perfectly every time to avoid this.

But beyond this basic task, cooking an egg also has its little mysteries. Starting with the time that you have to leave the egg to cook to obtain a more or less curdled yolk. Yes, 10 minutes is the standard time stipulated to cook an egg to the point, but beyond this time, there is a range of possibilities that can be very useful when it comes to eating not just a boiled egg but the perfect boiled egg. Or rather, a boiled egg just the way we like it.

To clear up doubts, stopwatch in hand, we have experimented with half a dozen eggs to check the results with different cooking times, from 4 minutes to 12 minutes, from the classic soft-boiled egg and designed to eat the yolk with a spoon (for under 6 or 5 minutes) until that well past egg – hard-boiled egg, as the English say – if we exceed 10 minutes.

Read on to learn How To Boil An Egg Hard. We will give some tips and tricks to make sure you always get it right.

Tricks to get the perfect boiled egg:

Beyond the cooking times, some tips and information are worth knowing when faced with the sophisticated task of cooking an egg.

Start with cold water or add the egg to boiling water? Experts recommend starting with the eggs in cold water for long cooking times (above 7 minutes). It is also a way that they do not break when you put them in boiling water. However, letting the water boil first and pouring them in later is a more precise way to control cooking time without having to watch to see when exactly they start to cook. And if we are going to cook them for less than 7 minutes, it will not affect the final texture. 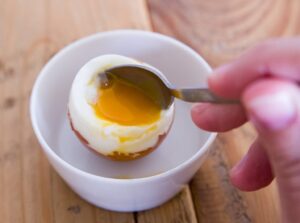 How To Boil An Egg Hard So they don’t break

So they don’t break. Those who live in fear that the egg will break when thrown into boiling water can follow these tips: leave it at room temperature for half an hour before cooking; make a small incision with a needle; and, of course, carefully throw it into the water, using a spoon rather than throwing it from two meters away.

Do I keep them in the fridge? It seems that there is little point in keeping your eggs in the fridge if they are at room temperature in the markets. Correct, but since what the eggs need is a cool, dry place and, above all, a constant temperature, the best place in the fridge. In addition to taking them out for a while before cooking, it is important that they are covered because their shell is porous and absorb odors.

Salt. Precisely because of that porosity of the shell, it makes sense to salt the water in which we are going to cook them so that the egg absorbs part of that salt. By the way, if we have truffles at home, storing them for a few days in a closed jar together with the truffles will also allow us to take advantage of that porous shell to give the eggs a unique flavor.

To peel them easily. Stopping cooking with cold water or even in a bowl with ice will not only make the task much easier when peeling them, but it also allows you to adjust the cooking times because, even if we remove them from the water, the residual heat that the egg maintains will cause that it continues to cook even if it is no longer in the casserole.

The numbering. With eggs, that very complicated rule works that say that you always buy the best product that your budget allows. Although in recent years it has become widely known, it never hurts to remember that in the numbering printed on the shell of the eggs, the first figure indicates the type of hen from which they have been obtained:

0 for hens fed with organic products, 1 for free-range living loose, 2 for raised on the ground, and 3 for the cage. The theory says that, although obviously there is a lot of picaresque on the part of the farms, and surely there is not as much free-range hen as we would like. So if your aunt in town has chickens, go see her more often and bring a dozen eggs.

Is it fresh? On the expiration of eggs, there are many theories, from those who say that the indicated consumption date must be followed to the letter, to those who say that they last a month without a problem and that neither case of expiration. Obviously, the fresher, the better, and, above all, if we are going to eat it raw or undercooked, it is better not to gamble too much to avoid scares. Anyway, a well-known trick to know how fresh an egg is is to leave it in water and check if it floats (a bad sign) or sinks.

How much did you like this information about How To Boil An Egg Hard? Do tell us in the comment section. We are always happy to know about your views on our provided information. Also, do follow us on social media | Facebook| Instagram| Twitter| LinkedIn| for all the latest information and news around the world. Join our tribe and allow us to become a part of your life.

How To Make The Hard-Boiled Eggs? Best Cooking Tips