In emerging countries, there is a serious problem in the number of new cases, especially in Brazil and India, which together with the United States lead the countries with the highest number of confirmed cases. Eventually, this will affect the Global Debt numbers to an unprecedented wave.

Governments are trying to respond to this situation through greater resources that come from the public deficit. At that point, the IMF is warning that these massive fiscal packages and new loans are already threatening credit ratings and the sustainability of many budgets.

Let us think that, on the one hand, we will see a sharp contraction in economic activity and, consequently, in tax revenues, along with considerable financial support from governments, which is expected to bring the global public debt to more than 100%. Of GDP this year.

The current forecast is that global GDP will sink 4.9% in 2020, consequences that dwarf even the global financial crisis or Global Debt between 2008 and 2009. Stagnating growth would lead China to modest 1% growth, to a collapse of the United States of 8% and the absolute collapse of the eurozone with a 10% contraction, with Spain and Italy suffering the biggest blow with a collapse of 12.8%. 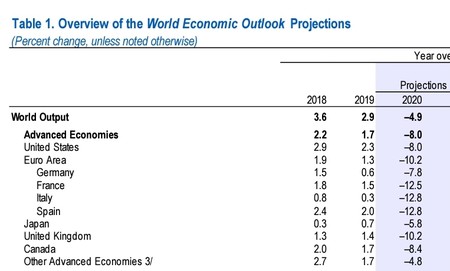 And to this contraction of GDP, we add the increase in public deficits. The average global fiscal deficit is expected to skyrocket to 14% of GDP in 2020. The reason is that it expects automatic tax stabilizers and social protection to help cushion the fall in household incomes during the recession and contribute to a third of the increase in deficits on average. In particular, government revenue is projected to fall more than sinking economies.

For all these reasons, we find that, on a global scale, at the end of the year we would reach the all-time high of 101.5% of GDP (an increase of 19 points in the ratio of GDP in one year) and, for the following year, we would reach 103.2% of GDP.

For advanced economies, the international body expects public debt to reach 130% of GDP, record levels since if we take into account the period of World War II, the peak reached 120%. 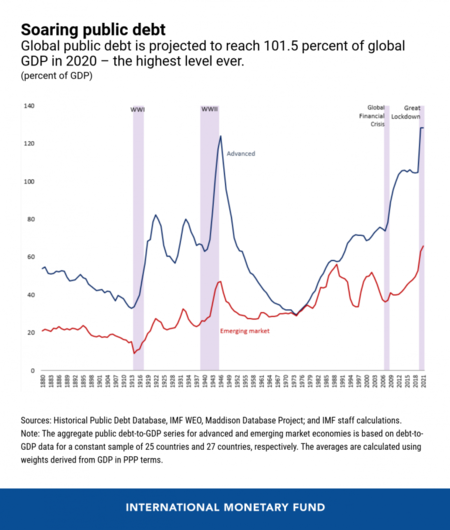 Many developed countries are the main drivers of the increase in global debt. They have concluded that this increase in public spending and, therefore, in public debt levels is the preferable option in the face of the general destruction of productive capacity, during the epidemic.

To give a concrete example, the issuance of gross public debt shot up to a record level of more than 2.1 trillion dollars in March, which is more than double the average between 2017 and 2019, which was 0, 9 trillion dollars.

The situation can be truly problematic for many countries because they would lack the support of available capital to face this extraordinary event; therefore, the spread of the virus would have serious difficulties in being controlled.

This challenge by governments leads us to the fact that the trajectory of debt and deficits is subject to great uncertainty and could rise in an adverse scenario if economic activity disappoints due to a resurgence of infections or if the contingent liabilities of A great liquidity support materializes when the financing conditions are tightened.

We cannot rule out in the more immediate future a new expansion of the virus that puts tension in the public budgets of different countries, and that presents problems to finance itself. We are discussing a debt crisis in which countries are tied by the inability to ask for money to refinance maturities and face expenses for the current year.

Thank you very much for reading, you can visit our Blog Section for more articles. Feel free to comment below your doubts and queries below.

50 Startup Ideas You Can Drive For A Low Cost